Kim Jong Un: When was Kim Jong Un last public appearance and what were his intriguing absences?

The secrecy of the North Korean regime complicates the confirmation or denial of the alleged complications of his health, but the propaganda reports show signs of his situation.
The public movements of the North Korean dictator Kim Jong-un, always followed by the millimeter by the communist propaganda, have made the news in recent days more because of his absences, which have fueled rumors about a possible health problem that has sown the uncertainty in the peninsula.
The reports, published by the Daily NK portal and CNN based on unidentified sources, indicate that Kim is “in serious danger after a surgical operation” came almost 10 days after the last public appearance of the supreme leader.
On April 11, Kim jong-un chaired a meeting of the Workers’ Party political bureau.
The novelty at that meeting was that he appointed his sister, Kim Yo-jong, as a substitute member of this body that functions as the executive arm of the North Korean official formation.
Protocolistically, his last pronouncement was only a few hours ago, when he greeted Cuban President Miguel Díaz Canel on his birthday, but these messages are a diplomatic gesture that does not assure the actions of the North Korean leader.

Instead, their absences have been more notorious (kim jong un).

The most striking was on April 15, when Pyongyang marked the anniversary of the birth of the regime’s founder, Kim Il Sung, Kim’s grandfather. Despite being by far the most important date on the annual political calendar, the supreme leader does not appear in any of the photographs released by the official press. 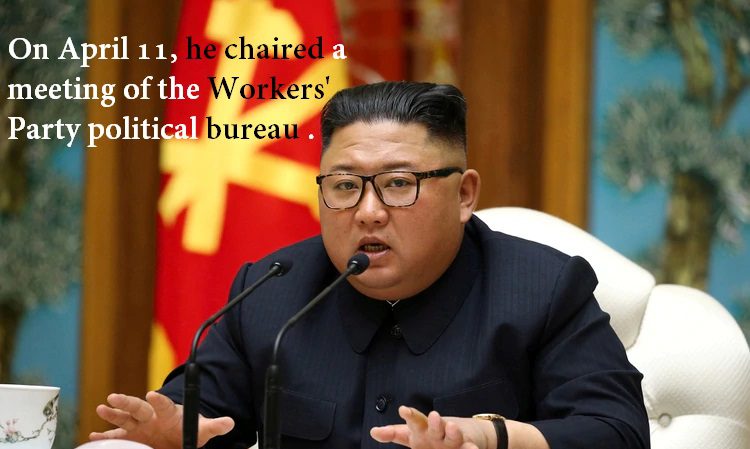 It is a tradition that every anniversary Kim visits the Kumsusan Palace of the Sun and pays tribute to the founder of North Korea, a tribute that the regime’s propaganda apparatus often covers extensively.
The rumors also come after two notable absences of the dictator at different events for the regime, starting with the session of the Supreme People’s Assembly (Parliament) that was held – without explanation – two days late, on April 12, and without that kim jong un was present.
North Korean propaganda also did not indicate the presence of the leader in an arms test that was carried out on April 14, an outstanding fact since the dictator usually supervises the military maneuvers to enhance his image.
Kim jong un overweight and heavy smoker’s health is one of North Korea’s most closely guarded secrets, generally only known to people in the inner circle of leadership. Although North Korea has curtailed major events while fighting the coronavirus pandemic (of which it has not confirmed cases), it has continued to organize activities.
A leadership crisis in North Korea could have serious consequences for regional stability, as well as for talks with the United States about the country’s nuclear arsenal. Kim, who took office in 2011 after his father’s 17-year reign, developed the ability to launch a nuclear warhead anywhere in the U.S. before engaging in direct talks with President Donald Trump about his arsenal and state-imposed sanctions.
“When Kim Jong Un came to power, his path to leadership had been carefully cultivated by his father’s advice and maneuvers,” said Mintaro Oba, a former US diplomat specializing in issues on the Korean peninsula. “Now, there is no clear transition plan or clear future leader.”
Rumors about Kim’s health caused benchmark indicator Kospi to expand losses on the Seoul stock exchange by as much as 3%, before closing at -1%, while the won fell 1.7% against the dollar.
Tags: kim jong unkim jong un agekim jong un childrenkim jong un healthkim jong un heightkim jong un newskim jong un sisterkim jong un surgerykim jong un weightkim jong un wife

The UK has announced the easing of international travel restrictions. According to a foreign news agency, the British authorities have …