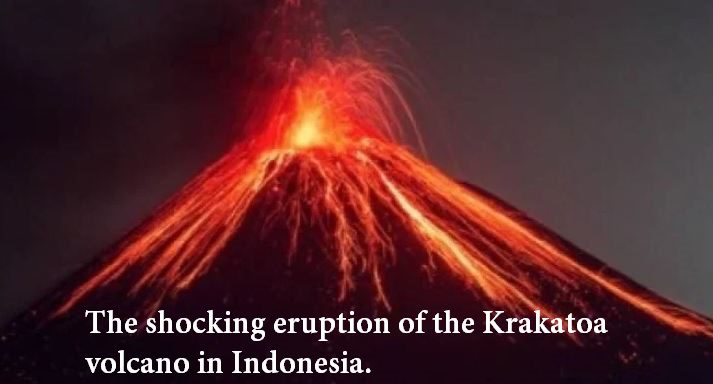 The exact moment of the eruption of the Anak Krakatoa volcano in Indonesia. It spewed lava and ejected large clouds of ash, with columns of smoke more than 500 meters high

Indonesian Anak Krakatoa volcano erupted Friday night, spewing a column of ash 500 meters (1,640 feet) high in its largest eruption since an explosive collapse on the island caused a tsunami in 2018.

Also, more than 15 volcanoes found within the Ring of Fire, including the most outstanding in the region, the Popocatepetl in Mexico and the Fuego in Guatemala, came into operation.

According to information, the volcano threw lava and ejected large ash clouds that reached hundreds of meters in height.
Besides, the eruptive pulse of the Krakatoa generated a series of telluric movements, alarming the population to the point of leaving the coronavirus quarantine behind and moving away from the place

The energy released from the Indonesian colossus would have activated the so-called “Pacific Ring or Ring of Fire”, a volcanic cord that includes other countries such as Japan and Mexico.

The volcano was in continuous eruption until Saturday morning explained the Indonesian Center for Volcanology and Geological Disaster Mitigation. Authorities maintained alert level 2, the second on a scale of four.

Anak Krakatoa, meaning Son of Krakatoa, is “son” of the Krakatoa volcano, whose eruption in 1883 caused a period of global cooling.